” It was only a question of a few minutes before the children felt confident about Svøbsk. They listened intensely to the music and the stories and came closer and closer to the stage and the musicians. ”
Jydske Vestkysten, Bert Schultz, March 2009

” The City hall of Skanderborg was transformed in to a regular display of fireworks of singing and dancing kids, when Svøbsk opened the festival. The trio captured the children from the beginning and delivered a very varied programme. ”
Rootszone, Per Dyrholm, October 2010

Svøbsk Trio are playing a family / children-concert, that we have been toruring during the last three years – with about 40 concerts a year.

The musicians have played so much together that they know each other very well musically, and they complement each other most brilliantly. The music is a mix of traditional and new folk music, brilliantly played with lost of soul. The audience will be whirled through a concert exude by folk music – with singing, dancing and slow and fast tunes on plenty of folk instruments. In the end it all ends in a big social dance. In danish folkmusic tradition Svøbsk is the name of a melodi – and dancetype, where you turn ’round and ‘round in a close embrace until you get all “svøbsked”.

The concert lasts 45 minutes and is suitable for kids from 3-12 years old or as a family concert (kids with their parents or grandparents), where yhe whole family can get a nice musical experience together. 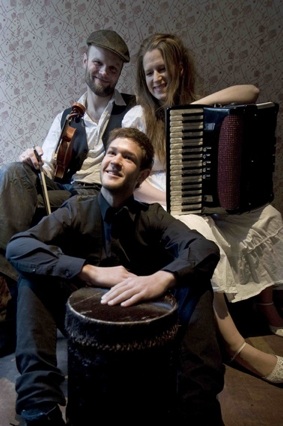